Aloe vera (Aloe barbadensis Miller) has been suggested for a wide variety of ailments but its use in dentistry is limited. This article reviews the uses of the plant and describes an in vitro investigation that compared the antimicrobial effectiveness of aloe vera tooth gel with two popular, commercially available dentifrices.
The preliminary results showed that aloe vera tooth gel and the toothpastes were equally effective against Candida albicans, Streptococcus mutans, Lactobacillus acidophilus, Enterococcus faecalis, Prevotella intermedia, and Peptostreptococcus anaerobius. Aloe vera tooth gel demonstrated enhanced antibacterial effect against S. mitis.

The success of any toothpaste, in part, lies on its ability to eliminate pathogenic oral microflora. Fluoride dentifrices
have been widely used all over the world and extensive research has established their abilities in terms of caries resistance.1

The gel or mucilage from Aloe barbadensis Miller (otherwise known as aloe vera) is a convenient homegrown remedy that can be used both as a moisturizing agent and for treating minor burns and skin abrasions. Aloe vera is a cactuslike plant that actually is part of the lily family. There are more than 300 varieties of the aloe plant but the Aloe barbadensis variety exhibits the best medicinal properties.

Modern use of aloe vera was first documented in the 1930s to heal radiation burns.2 Aloe vera juice taken internally has been shown to have various beneficial effects on the body.3-6 The efficacy of Aloe barbadensis Miller increases when the plant is harvested after three years of growth but its nutritive potency decreases after 12 years of growth.7 Aloe gel will lose its complete potency if it is exposed to sunlight for more than two hours, as it is easily oxidized; consequently, it
is necessary to stabilize it under pharmaceutical standards for ready use and longer shelf life. Non-profit organizations like the International Aloe Science Council have set standards for aloe vera approval and give their seal of quality for aloe products. Such products are more beneficial, since the seal is given to only those products with established therapeutic benefits.7 This in vitro evaluation compared the antimicrobial activity of an aloe vera tooth gel and two  ommercially popular, locally available toothpastes. These toothpastes were tested against seven pathogenic microorganisms that frequently dominate the oral microbiota. The results are intended to show the relative  ntimicrobial effectiveness of each dentifrice against each particular species. Materials and methods To demonstrate antimicrobial activity, this study utilized an aloe vera tooth gel (Forever Bright, Forever Living Products, Scottsdale,
AZ; 888.440.2563), known as Toothpaste A, and two commercial, locally available toothpastes: Pepsodent (Unilever, Englewood Cliffs, NJ; 201.894.7660) and Colgate (Colgate-Palmolive, Canton, MA; 800.821.2880), known as  toothpastes B and C, respectively. This study used freeze-dried stock culture of the reference strains of Streptococcus mutans, Candida albicans, Lactobacillus acidophilus, S. mitis, Enterococcus faecalis, Prevotella intermedia, and Peptostreptococcus anaerobius. The organisms were cultured in trypticase soy broth and transferred to the selective
media to revive from the stock. 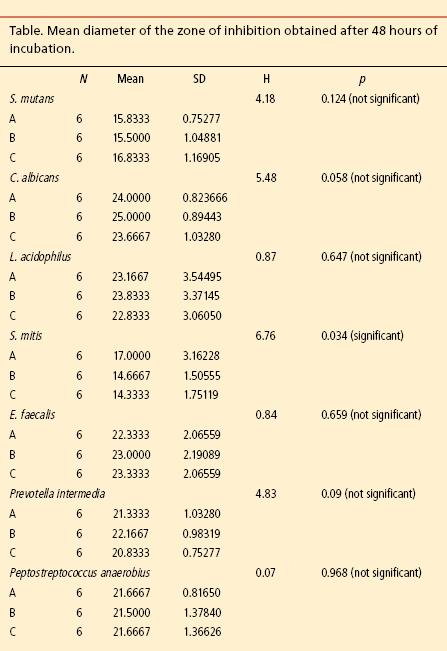 The organisms employed in the study were cultured in their respective selective media. For example, S. mutans was cultured in Mitis Salivarius Bacitracin Agar (Gold’s Media), C. albicans in Sabouraud’s Dextrose Agar, L. acidophilus in Rogosa SL Agar, S. mitis in Mitis-Salivaris Agar, E. faecalis in Mac Conkey’s Agar, and both Prevotella intermedia and Peptostreptococcus anaerobius in Neomycin Blood Agar.8 The purity of each test strain was checked during each trial by using subculture, Gram’s stain, and colony morphology. Antimicrobial susceptibility was checked by using the ditch method.9 The Muller Hinton Agar was used to demonstrate the antibacterial effect on aerobes, while Wilkins Chalgren Blood Agar was used for anaerobes and Sabouraud’s Dextrose Agar for Candida. 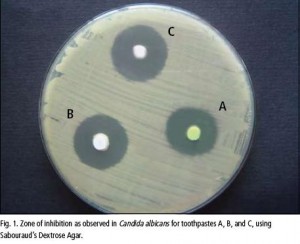 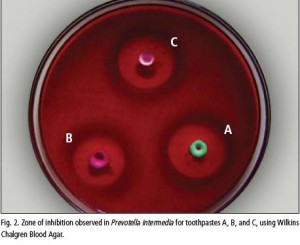 Three wells (4 mm in diameter and 3 mm deep) were made using a sterile metallic template, with a rubber teat in each plate. The inoculums were prepared and adjusted to 0.5 McFarland turbidity standards, according to National ommittee on Clinical Laboratory Standards (NCCLS) guidelines.10 The agar plates were streaked with the respective stock culture microorganisms.

Using a sterile spoon excavator, the toothpastes were dispersed into the wells. At that point, the plates were incubated at 37°C for 48 hours in the respective environments—that is, E. faecalis and C. albicans in the incubator, S. mutans and S. mitis in the candle jar, and L. acidophilus, Prevotella intermedia, and Peptostreptococcus anaerobius in an anaerobic jar (Hi Anaerobic System-Mark II with Anaerobic Hi Gas Pack, Hi Media Laboratories, Mumbai, India; 91.022.2500.0970), which works on the principle of gas generated from chemicals.

After incubation, zones of inhibition (that is, locations where no growth of bacteria was present) were examined around the wells that contained the dentifrice. These appeared as a clear, circular halo surrounding the wells. Diameters of the zones were measured with a Hi Antibiotic Zone Scale (Hi Media Laboratories). The mean diameter of the well’s easurements (in mm) represented the inhibition value of the tested product. No attempt was made to obscure the  dentity of the test agents. The test was repeated six times in triplicate to overcome any technical errors that might have occurred during a single attempt. The Kruskall Wallis Test was utilized, with SPSS Version 14 software used to analyze the results.

Results of this preliminary in vitro study demonstrated that aloe vera tooth gel was equally effective as Toothpastes B and C for controlling all of the organisms in the study. All three toothpastes showed maximum antimicrobial activity
against C. albicans and all anaerobes in vitro.
Compared to the Toothpastes B and C, Toothpaste A demonstrated an increased antibacterial effect against S. mitis (p = 0.034). The table lists the zone of inhibition obtained from each toothpaste after 48 hours.
Discussion

A review of the literature suggested that the potential of using aloe vera for oral hygiene had not been evaluated prior to this study. The antibacterial, antifungal, and antiviral properties of aloe vera have been established; in addition, it
reduces inflammation and pain and aids in healing.
The antimicrobial effects of aloe vera have been attributed to the plant’s natural anthraquinones: aloe emodin, aloetic acid, aloin, anthracine, anthranol, barbaloin, chrysophanic acid, ethereal oil, ester of cinnamonic acid, isobarbaloin,
and resistannol.11 In relatively small concentrations together with the gel fraction, these anthraquinones provide analgesic, antibacterial, antifungal, and antiviral activity; in high concentrations, they can be toxic.12 Saponins, which contain glycosides, are soapy substances that have both cleansing and antiseptic properties.13-15 Acemannan, a omplex mannose carbohydrate derived from the aloe vera plant, has an inherent stickiness/viscosity, which makes it
ideal for denture adhesive formulations.
A 1998 study reported that acemannan formulations of 150:1 (containing 0.05% benzalkonium chloride, 0.1%  ethylparaben, and 0.01% hyamine 1622) exhibited ideal adhesive strength and pH and minimal cytotoxicity.16
The organisms employed in the present study include both the normal flora and pathogens of the oral cavity. S. mutans has been strongly associated with the initiation of caries, while there is a correlation between Lactobacilli and the further
development of carious lesions.17 A 1995 study by Bai et al demonstrated a high Candida count in children with insulin-dependent diabetes mellitus, a condition associated with symptoms like dry mouth, burning sensations, and painful fissures.18 E. faecalis has been associated with re-infection and subsequent failure of endodontically treated teeth.19 Anaerobes are a significant part of orodental flora. Their role in periodontal disease and root canal infection is well-established, as is their role as foci for disseminated infectious disease. Prevotella intermedia were predominant amongthe anaerobes recovered from these periodontal infections, which meant these particular organisms were appropriate for the present study.20 The majority of the antimicrobial effects of commercially available toothpastes can be attributed to their fluoride content, in the form of sodium monoflourophosphate (a concentration of 500–1,000 ppm). The aloe vera tooth gel used in the present study has no added fluoride content but still exerts almost an equal amount of antimicrobial activity. Conclusion This preliminary in vitro study demonstrated that aloe vera tooth gel was as effective as two commercially popular toothpastes in controlling all of the organisms used in the study. In addition, the gel demonstrated superior antibacterial effect against S. mitis despite the absence of additional fluoride.

Share the post "Comparative evaluation of the antimicrobial efficacy of aloe vera tooth gel and two popular commercial toothpastes: An in vitro study"